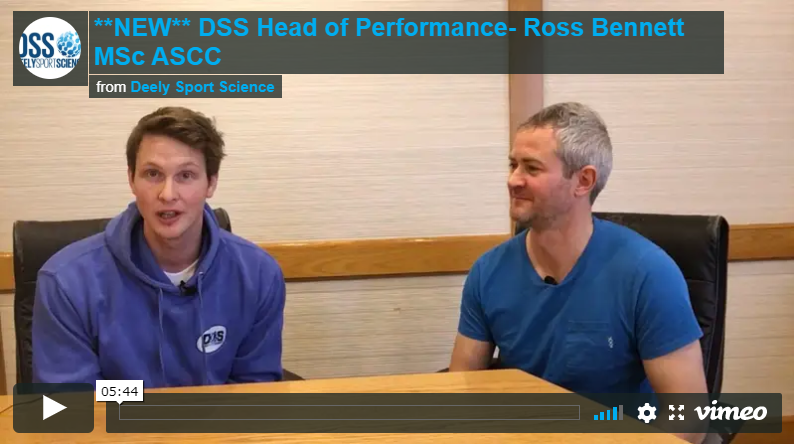 18 Jan Ross Bennett Head of Performance for DeelySportScience – An Intro

Firstly, I must say, after studying the content and observing Ciaran on his journey of building his company DSS over the years, it is a real pleasure and privilege to become a part of it. I have personally worked with Ciaran continuously for the last 6 years (apart from a 5-month period where Ciaran was off working in India), in both professional ‘soccer’ and GAA, and I am delighted to expand this working professional and personal partnership, to provide the best service for you, the members of DSS.

I think it would be good to give you a little bit of history about myself, as I am aware I am probably not the most well-known practitioner in the GAA world in Ireland particularly! Even though ahead of the Connaught Championship Quarter Final against Sligo in 2018, I had a double page feature in the Irish Sun!

Starting from the beginning, I was an aspirational professional footballer here in England, just outside West London where I grew up. I played for professional academies Millwall FC, and Brentford FC up until I was playing U17 football. It was at that age where I departed the club and focussed more on my academic studies. I then completed A-Levels and went on to study at St. Mary’s University in Twickenham, a prestigious catholic university notorious for Irish students. It was here where I studies Strength and Conditioning Science, whilst playing semi-professional football part time. Fortunately, when I was in my second year at St Mary’s, I was offered an internship at Chelsea FC, the opportunity to work with their academy players, delivering physical development sessions primarily to their foundation phase players (9-11). At the end of the season, I was then chuffed to be offered a part time job at Chelsea, delivering S&C / movement sessions across the academy age groups. Academically, once I completed my BSc, I then undertook an MSc down the road, at Brunel University in Human Performance (Sports Science). Simultaneously, I was still working part time at Chelsea increasing my part time hours annually and gaining more and more experience working with arguably the best young academy players in the world.

After 5 years of working at Chelsea FC, where I worked with numerous young professional footballers in both the premier league and championship as we speak, I was contacted to go and work in Qatar, at their nationalised academy, called Aspire. The role was providing S&C support solely to the U15 national team, in the attempt to start to build a national team for Qatar for the World Cup in 2022. This was a fascinating experience, from both a professional and cultural lifestyle perspective. I was then offered the opportunity to return to the UK, working with QPR FC as the lead S&C for the YDP age groups (12-16’s). Having completed 6 years there to this month, I have also worked with the U23’s as the lead S&C / Sports Scientist and am now currently the Head of Academy Performance, in which I oversee the S&C, sports science, psychology, nutrition, and performance analysis sub-departments. Alongside my time at QPR, from 2015 – 2019, I was also the Head of Performance at the Senior London GAA Football Team, in which Ciaran bought me in once he was appointed as the manager in 2015. Within this period, I also worked as the lead sports scientist for the biggest and most successful GAA football club in London, TCG. So, now you know a bit more about me personally, I think it’s important to address how I can help build on this fantastic resource and outline some initiatives you can expect as members.

Firstly, the two initial things I will focus on alongside Ciaran are: developing an annual plan with monthly periodised sessions for your GAA club, as they are currently starting back for pre-season training ahead of the new season. This will be a great resource in which you can see an example on the website, or purchase for a very moderate fee, a more detailed plan you can use directly with your team or adapt to suit your training outcomes. This will provide both the theory and planning of how we periodised our training plans with London, and incorporated all aspects of development simultaneously – physical, technical, tactical etc… This will include content for all pitch sessions, gym sessions, recovery and so on…

Alongside this, there will also be a direct package available to any club team, that want us to provide a bespoke programme for the season, with regular contact to discuss goals and the specific focus of your team. This will include weekly dialogue to assess how the training programme is going and any modifications that need to be made. More info on these initiatives will be available soon on DSS.

The other aspect that will be my focus in the short term is providing more content on the sports science / physical development aspect, whether that be on / off pitch, fitness work, speed / agility development, integration of physical work within the setup, monitoring, gym work etc… The first theme will be looking at locomotive development (speed / agility / movement mechanics), and will depict my knowledge, experience, opinion on how best to programme these. There will be within the next few weeks a blog post on this topic, followed up by a vlog that gives the opportunity for me and Ciaran to explain the details a bit more. Then we’ll set up a forum, so all members can interact with myself and Ciaran and get some more ideas / discussion around this area. Every month then will see all the above resources and content focussing on a different physical development topic. If there are any ones that you would like to see, then please get in touch and we can arrange it.

Longer term, and looking ahead to the summer, and in ‘soccer’ and my day job that time becomes the off-season, a bit of down time, I and the business will look to start developing some content for the soccer industry, in which lots of sports can translate and find hugely beneficial. A lot of what we implemented at London, came from our experiences within soccer, and vice versa. There are huge amounts each sport can learn off each other.

This short intro blog summarises my experiences / background and outlines my intentions to provide some new initiatives for DSS, of course working with Ciaran very closely. Thanks for your time in reading this and getting to know me a little better, and I really hope you will enjoy the content we will keep putting out. For your benefit, and ours, please interact as much as possible on all the services that are available, the more you get involved as members in this whole process, the more you will get out of it and everyone benefits.