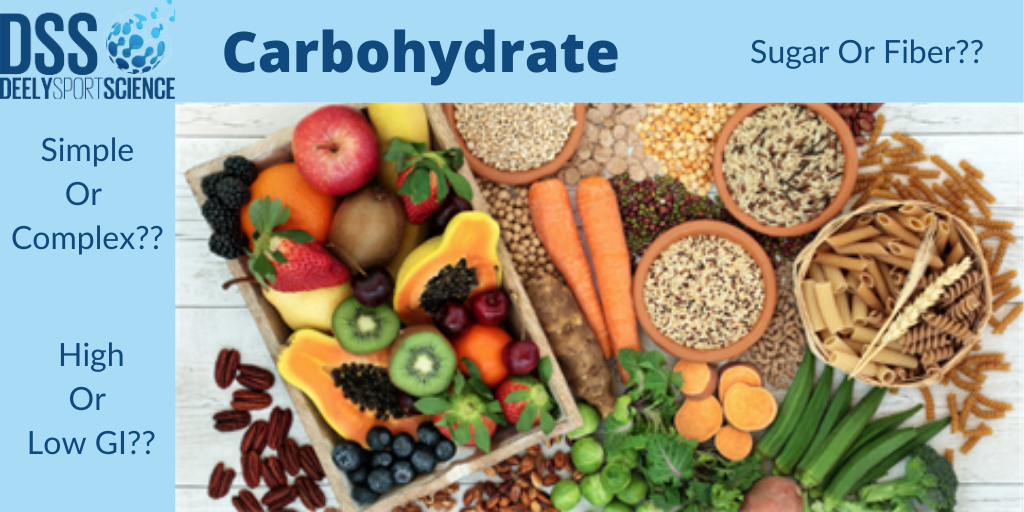 Posted at 11:00h in Nutrition by Caoimhe Morris 1 Comment 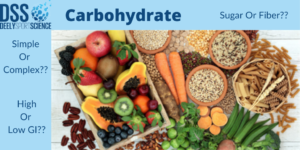 This week’s article is based on carbohydrate with a particular focus on health. We will piece the various information here together with specific pre- and post-game examples in a couple of weeks, but today will be mainly based around providing an explanation of what carbohydrates are. Specifically we will look at:

Carbohydrates are the sugars, fibres and starches found in grains, vegetables, fruits and milk products that make up our diets. Carbohydrate based foods have been semi-demonised in recent years with the growth of ketogenic style or LCHF diets (and their crazy second cousin, the carnivore diet) but they are very important to a healthy diet for a variety of reasons, particularly in active populations. We use carbohydrate as our main source of energy, particularly high intensity activity, and some organs (such as the brain) require a steady supply to function properly as it cannot store carbohydrate. Carbohydrates get their name from the chemical structure as they are made up of carbon, oxygen and hydrogen. 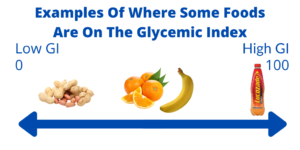 Another method we sometimes use to classify carbohydrate is through the glycemic index. The glycemic index measures how quickly blood sugar levels rise as we digest a food. Generally, simple carbohydrates will lead to a quicker rise in blood sugar, and so are placed higher on the GI scale. Complex carbohydrates, which are lower in sugar and higher in fibre are placed lower on the GI scale. Examples of foods high up the GI scale are raw glucose (found in Lucozade) and spuds while nuts (largely due to their fat content) are much lower. Where foods are placed on the GI scale has some importance if we eat them in isolation but because the majority of foods are consumed as part of a larger meal it isn’t something we need to be overly concerned about in general day-to-day living. For example, a baked potato is placed quite high in the GI scale but is rarely eaten in its own. If eaten with a steak, topped with cheese or baked beans then the digestion speed of the other foods will largely slow down the baked potato. The GI scale does take on a bit more importance when we consume foods in isolation, particularly if carb-loading or snacking in the lead-up to a game/training. Sugary foods, such as toast with honey/jam, jaffa cakes, fig rolls or wine gums will be digested mush faster than some brown rice and so provide immediate energy for the upcoming game. Examples and guidelines for specific pre-game situations will be discussed in another edition of this series.

Table 1 – Where carbohydrate sources fall on the glycemic index 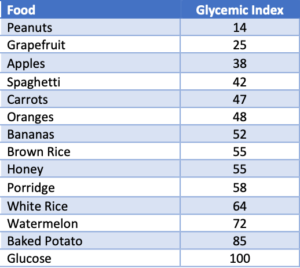 Sugar is a carbohydrate. There are different types of sugars that make up carbohydrates but the most common to our diet are fructose, sucrose and lactose. Fructose is found in fruit, sucrose makes up most refined or “added” sugars while lactose is found in milk or dairy products. While sugar is often blamed for the rise in obesity, diabetes and a variety of other health issues, it’s not necessarily due to consuming sugar in isolation. As a single nutrient, sugar provides a lot of energy (high in calories) which can be useful in certain situations (such as loading up for a match or long race) but has negative consequences when over-consumed (large portions in predominantly sedentary lifestyles). While not a direct cause of many health complications, sugar is a large contributor as it’s so easy to over-consume. A large amount of calories are stored in a small amount of sugar (calorie dense) and sugary snacks are often designed in ways that we keep going back for more (those clever folk in marketing!). Lately fruit, and to a lesser extent, dairy, have been labelled unhealthy due to the presence of sugar. Thankfully, neither are true (bar some specific food allergies) as fruit contains many other nutrients and are much lower in calories relative to their size. Basing your diet on a variety of whole fruits and vegetables (try avoid juices) will lead to an overall healthier diet, full of vitamins and minerals, that leaves with a steady supply of energy with no major drops or spikes in blood sugar.

A full article will be dedicated to fuelling performance, whether it be training or matches, at various times of the week but a few basic guidelines are:

The next instalment will look at fats and the role they play in both health and performance.