Posted at 09:34h in Nutrition by Caoimhe Morris 0 Comments

Having looked at protein and carbohydrate over the past few weeks, we now turn our attention to fat. While dietary fat has received a lot of negative attention in the past and public health officials warned us off fat throughout the 80s and 90s, it does play an important role in the diet. Both protein and carbohydrate are important contributors to performance, while fat is more beneficial for general health, although this will have knock-on effects for performance. Some sports may benefit from a diet high in fat (and will we discussed below) although the evidence is still inconclusive at this point.

This article will provide a brief explanation of what dietary fat is, it’s role in the body, the impact on health and some of the reported benefits for sporting performance.

Fats are organic molecules made up of carbon and hydrogen elements joined together in long groups called hydrocarbons. The arrangement of these hydrocarbon chains, and their interaction with each other, determines fat type. Similar to carbohydrate (and the number of sugars/saccharides), there are different types of fat (dependent on their structure and type of bond). The simplest unit of fat (like a simple carbohydrate or monosaccharide) is the fatty acid. Fatty acids are made up of simple hydrocarbon chains with special chemical groups at each end. Hydrogen atoms can bind to the hydrocarbon chain. This is known as saturation. The more hydrogens bonded, the more saturated the fat is. If hydrogens have filled up all the available bonding spots on the chain, the fat is saturated. Because of this chemical structure, saturated fats (such as butter or coconut oil) are usually solid or semi-solid at room temperature (depending on how warm you like your room!). If only some hydrogens have bonded, the fat is unsaturated. Unsaturated fats are usually liquid at room temperature. The less saturated the fat, the more fluid it is. Unsaturated fatty acids can be broken down into either monounsaturated (where only one carbon is unsaturated) and polyunsaturated (where more than one carbon is unsaturated). Fatty acids can be joined together to form triglycerides. As the name suggests, three fatty acids join together with a glycerol molecule to make up a triglyceride. Triglycerides are the major form of fat found in the diet, and the major storage form of fat found in the body. To digest fat, the body breaks down triglycerides into fatty acids and glycerol, which are repackaged in various ways before entering the bloodstream. Because it takes so long for the body to break down and transport fat, it enters the blood several hours after we’ve eaten it.

The role of fat

Dietary fat has six major roles in the diet. 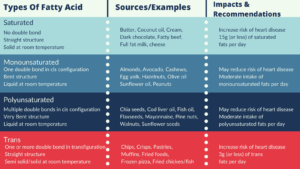 Saturated fat, and fats in general, become an issue when we consume it through highly processed foods along with excess sugar and salt. This leads to overconsumption of calories, and in turn, excess weight gain. This weight gain leads to a number of health complications such as cardiovascular disease, metabolic syndrome, type 2 diabetes, etc., Public health guidelines generally recommend we reduce our intake of saturated and trans-fats as they are the most commonly used in highly processed foods. Trans-fats are also very difficult for our body to process effectively and can lead to reduced blood vessel function. See figure 2 for some rough guidelines on fat intakes for general health.

Fat fuels low intensity activity, not just exercise, but activity in general. As you sit there reading this on your phone, you’re using fat as the main fuel source. A very small bit of fat, as the calorie cost of sitting and reading your phone is quite minimal. As intensity increases, you begin to burn more carbohydrate. The highest intensities of exercise (think running 400m intervals) will be almost completely fuelled by carbohydrate. As you begin the easier aspects of a general warm-up, you should still be predominantly fat until heart rate increases and you use more oxygen for the work being completed. The fat you’re “burning” can come dietary fat you’ve eaten in the past few hours, or from stored fat in the body.

The point at which you change from burning mainly fat to mainly carbohydrate can be manipulated by changes in overall diet and from specific training practices. Some suggest that fat should be utilised as the main fuel source for long distance endurance events, such as marathons, triathlons, race walking etc., as we can only store enough carbohydrate to fuel a little over an hour of exercise. As glycogen stores (carbohydrate broken down into fuel) are used up, we need to replenish with more as we exercise. This is why you’ll see cyclists munching on cereal bars, marathon runners squeezing back gels or triathletes mixing water with extra thick Lucozade sport before a race. It’s to provide the fast acting carbohydrate at various intervals of the race. Low carbohydrate, high fat (LCHF) advocates suggest that becoming fat adapted (eating predominantly dietary fat, moderate protein and little to no carbohydrate) reduces this need to for refuelling as fat stores can be used to fuel performance in endurance events. Some research has been conducted in this area and results have shown some promise, albeit mainly in recreational athletes. Some of the successes have also been attributed to weight loss which made for more efficient athletes. The most well-known study in elite athletes (racewalkers) by Louise Burke found that a LCHF diet impaired performance although it would be interesting see the effects of a LCHF diet over a longer period of time (6 months plus). Some individuals may benefit from a higher fat and lower carbohydrate intake (for health and performance outcomes) although it is worth consulting with a professional to assist with this approach as a reduction in carbohydrate can make it difficult to consume many essential and beneficial nutrients.

The next instalment will look at how to put your own diet together with specific protein carbohydrate and fat requirements based on your size and activity levels. We’ll also begin to build a full week of eating that can be adjusted for training and other activities.