Posted at 11:23h in Nutrition by Caoimhe Morris 3 Comments 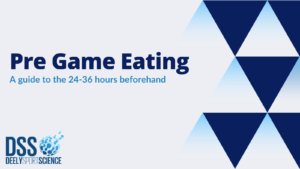 Before we go into any details, it must be stated that eating terribly in the weeks, months and even years before a game will not be counteracted by the perfect pre-game meal. For those of us who have got our nutrition nailed down during the week, are at an appropriate body-fat level and have fitness levels that are ready for performance then what should we eat to maximise our performance? 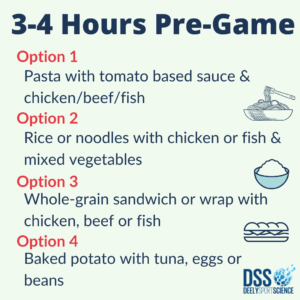 Ideally we’d start preparing 24-36 hours out from a game. A club GAA player can expect to cover between 6-8km in a game of hurling and 7-10km in a game of football (position dependent). A lot of that distance is covered via high-intensity running and includes a number of short sprints, accelerations, jumps and tackles. These have a high energy cost on the body and require us to properly fuel up in advance.

Low-carb, high-fat diets (such as keto style) have increased in popularity recently as they have shown some positive benefits in both health and sporting situations. Intermittent field sports, such as Soccer, Rugby and GAA are not suited to a low-carbohydrate diet especially in the lead-up to a game. Gaelic Footballers have been shown to burn up to 1,200 calories in particularly high-intensity games of particularly high-intensities. Replacing that much energy during game-time is neither practical nor useful (due to how long it can take energy to be absorbed by the body). 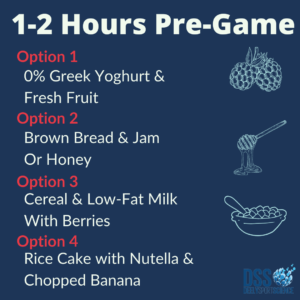 Guidelines around Australian Rules and Soccer recommend up to 7 grams of carbohydrate per kg of bodyweight to be eaten in the 24 hours leading up to a competitive game. For an 80kg player that could mean consuming over 500g of carbohydrate. This is purely for competitive games and players at the higher end of calorie expenditure (particularly energetic midfielders and halfbacks/forwards). All other players can scale back from this amount depending on how much energy they generally expend during a game.

To try and consume this much in the pre-game meal would be both uncomfortable at the time of eating and during the game itself. Planning how best to eat all of this carbohydrate well in advance is key to properly fuelling for a game.

To use the example of a 7pm, Saturday evening game, we recommend beginning the carbohydrate load at Friday lunchtime. Adding an extra serving of carbohydrate to your normal lunch as well as your normal meals in the lead up to the game is generally the easiest way to meet guidelines (see the suggested eating plan at the end of this piece). On the day before the game we still recommend keeping your sugar content relatively low and encourage the intake of carbohydrates that are higher in fibre and are derived from wholegrain sources. Potatoes, rice, brown bread and porridge oats will generally be your best options.

As game time draws closer then you can add in some options that are higher in sugar. Avoiding foods high in fat, and in fibre, are key to absorbing the ‘fast-acting’ carbohydrates that will help provide the final top-up of fuels for performance. Both fats and fibre will slow down digestion so minimising their consumption will aid in how much you can utilise the carbohydrate you are eating. ‘Fast-acting’ carbohydrates will be absorbed by the body much faster than traditional high-fibre, wholegrain sources and are generally higher in sugar. Toast with jam, breakfast cereals, fat-free fruity yoghurts, jaffa cakes, fig rolls and isotonic drinks are some of the more popular ways to ‘top-up’ with energy as you reach the final hours and minutes of preparation.

See suggestions for a 7pm Saturday game and 3pm Sunday game (the two most popular times outlined below). 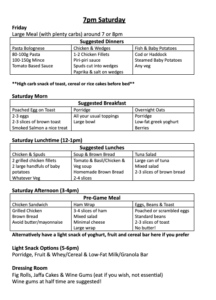 Protein consumption has not been addressed in this as we recommend 4-6 even portions of protein to be evenly spaced throughout each day regardless of activity levels. Having your final portion of protein about 2-3 hours before a game will generally be enough time not to cause discomfort when playing. Foods high in carbohydrate and moderate protein is ideal for recovery after the game. Chocolate milk and a banana immediately after the game followed by a traditional meat and potatoes/rice meal an hour or so later will help to replenish glycogen stores as quickly as possible. 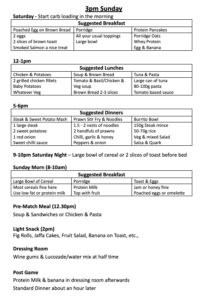