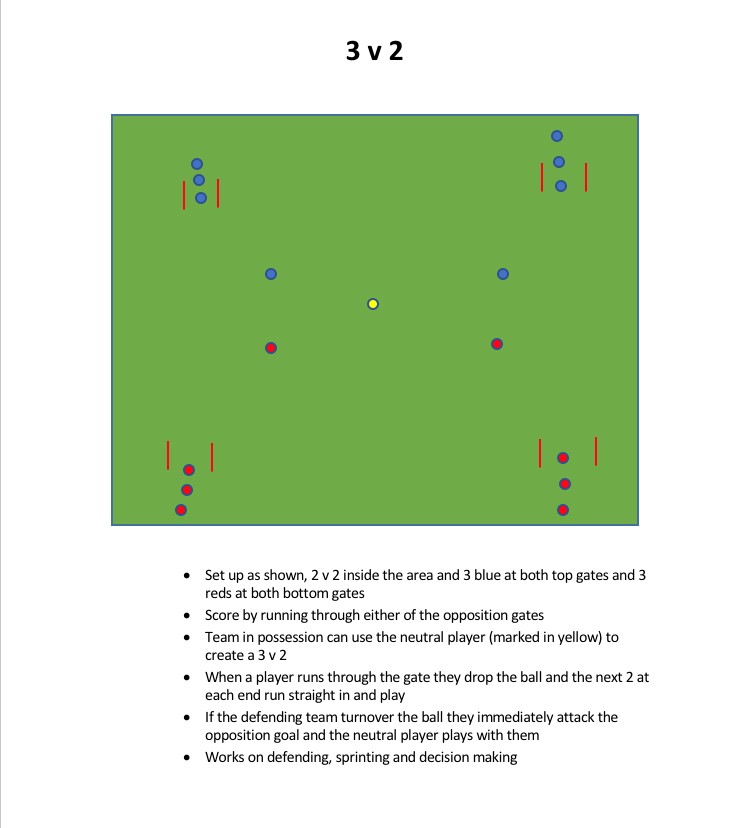 Posted at 17:11h in Hurling by Ciaran Deely 1 Comment

“Linear coaching focuses on how to execute a skill, it does not teach when, where, and why” – Richard Light 2014

From my early days as a games promotion officer with Dublin GAA, through coaching and teaching coach education courses it was obvious that playing games was a necessary part of coaching. I was, once, a coach who believed that a games-based approach (GBA) was a difficult approach to take when coaching hurling. Many of the great GAA coaches I observed through the years, John Morrison, Colm Nally, Ger Lyons and Mick Bohan to name a few, were football coaches. Instead of adapting their ideas I persisted with the traditional approach, drills, bit of backs and forwards and match to finish.

One of the best decisions I ever made was doing a Masters Degree in Sports Coaching at the University of Birmingham. It opened my eyes to several things, particularly reflection and thinking creatively. Not only had I terrific lecturers who challenged us, I was surrounded by professional coaches from sports such as golf, soccer, swimming, hockey, fencing and rowing. Ronan O’Gara described himself as a ‘copy & paste coach’ he would take something from one coach or sport and apply it to his coaching. I was now going to ‘think outside the box’ and learn from other sports, observe different coaches and adapt.

Ometto et al., (2018) described SSG as an opportunity to practice performance in a sub scaled version of the whole formal game. These games provide opportunities to experience physical, physiological, cognitive and technical demands of the sport. When designing or adapting the games, always keep in mind the demands of the sport. Ask yourself the question; what will the players experience during the match? If your sport is soccer, are your players being afforded the opportunities to look up and pass under pressure? In my own coaching my aim for each session is to ensure the players can make a decision with each ball they get and as much as possible, use the ball under pressure. In my previous blog I refereed to Bernstein’s (1967) “repetition without repetition”. I would urge all coaches to ensure that their players are ‘repeating’ decision making as much as possible. 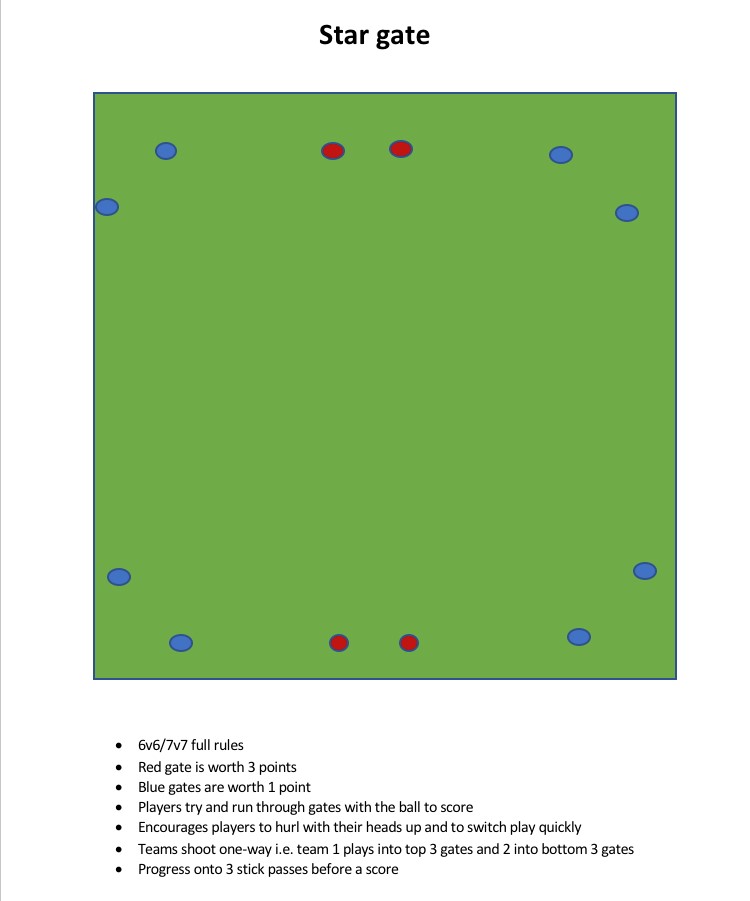 It’s worth noting, as mentioned earlier, a GBA can mean many things. 2v2/3v3 and scoring. As you can see below in a scenario/drill adapted from rugby, the idea is to use the ball at pace while making a decision as to where to pass under pressure.

As important and as useful as SSG are, coaches do tend to rely on them too often. Hristovski et al., (2006) discussed the “metastable performance region”. The environment your athlete or players are in is crucial. If you place a boxer too near a punching bag, their jabs will suffer, too far and their uppercuts will suffer due to an over use of the jab!  Over use of SSG can be repetitive, result in overuse injury and lead to bad habits being developed.

As a player I always hated backs and forwards. We would rarely have 25-30 players for a full match, especially when it was football week. We would always finish with a good auld game of traditional backs and forwards. We would line out 6 backs and 6 forwards, maybe 2 midfielders and the coach or injured player would puck in the ball. I, the corner forward, knew exactly where the ball was coming from and when I got the ball, I, along with the player I was marking knew that we were not going to receive a ball for at least another 3 or 4 minutes. Additionally, it was frustrating when the coach announced it was time for the forwards to become the backs which never made sense to me! The traditional backs and forwards idea is a completely flawed concept that will only inhibit performance.  As I became a better coach, I decided that I would never adopt this approach. I would use ‘match scenarios’ or as soccer science expert Paul Ford described as ‘modified competitive environments’. Below are examples of a realistic approach to ‘backs and forwards’ where backs have incentives to use the ball as well. 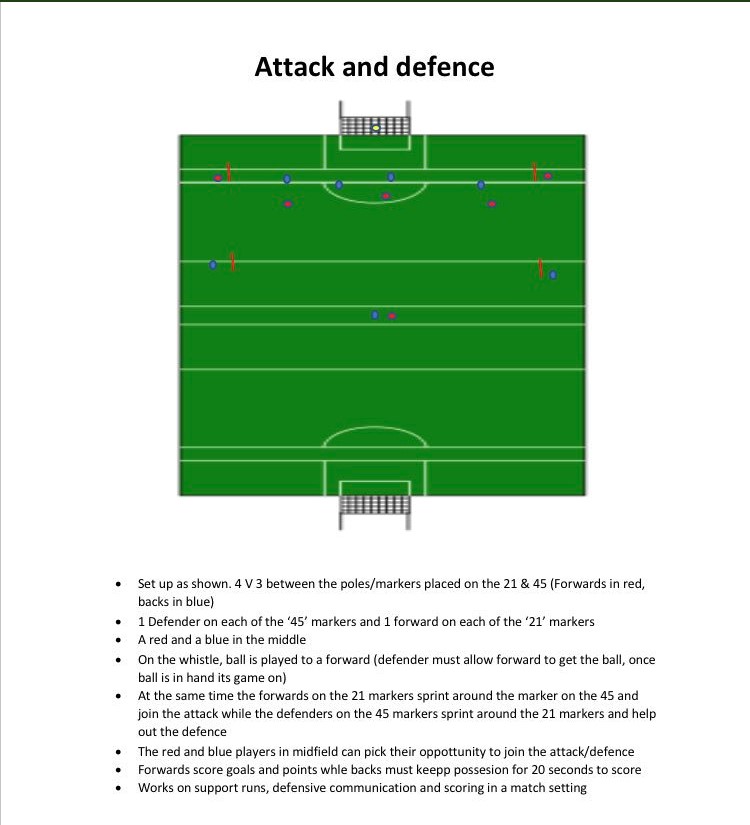 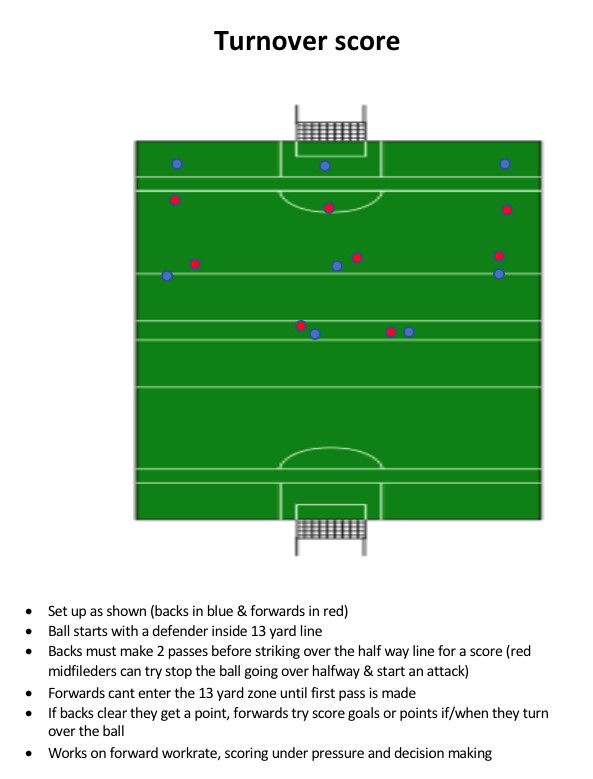 When you are designing your games, think about what you are trying to improve. A coach should isolate the part of the game they wish to improve and then design the session/game around that. As mentioned earlier, one should not mistake a GBA as playing SSG. A coach needs to be cognisant of lengthening or widening the playing pitch. It worth noting Gabbet, Jenkins and Abernethy’s (2009) belief that realistic improvements in fitness and performance happen when sessions stimulate the physiological and technical demands of competition. 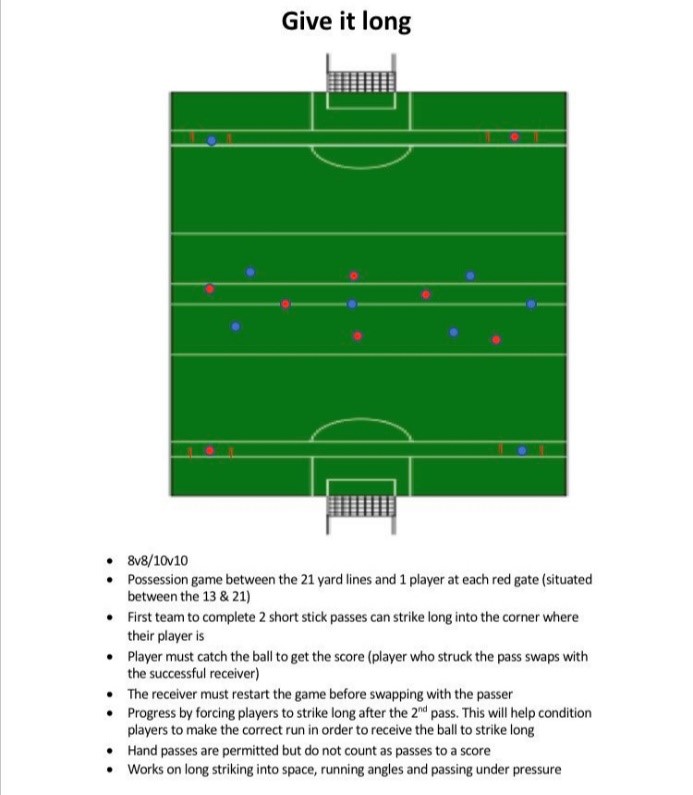 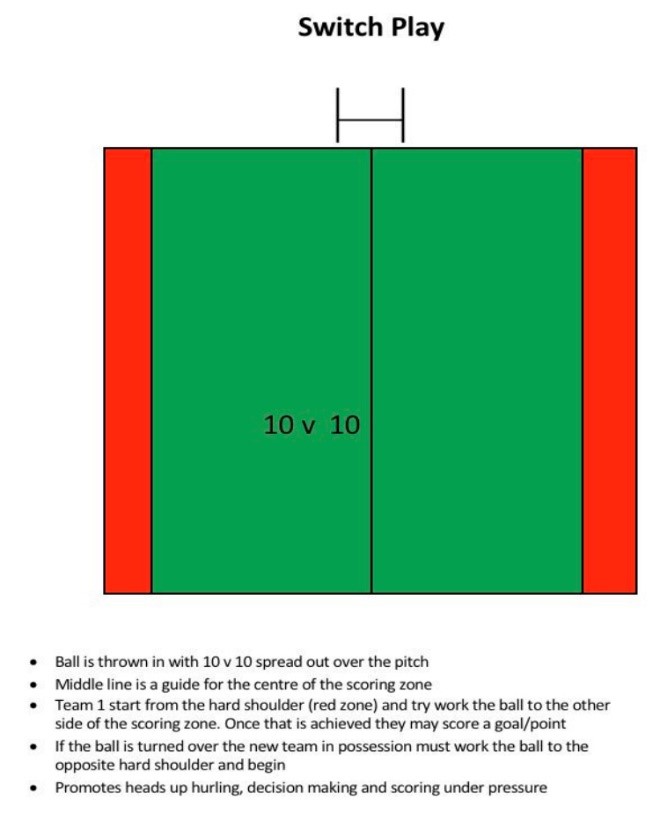 The above games are examples of a long-sided game and a wide sided game. The ‘give it long game’ is designed to improve long striking under pressure. The idea is to work on the technical aspects of the game in a match environment. Similarly, in the ‘switch’ game. The pitch is made as wide as possible, so players have lots of space to work on technical aspects of the game such as off the ball running, passing as well as scoring under pressure.