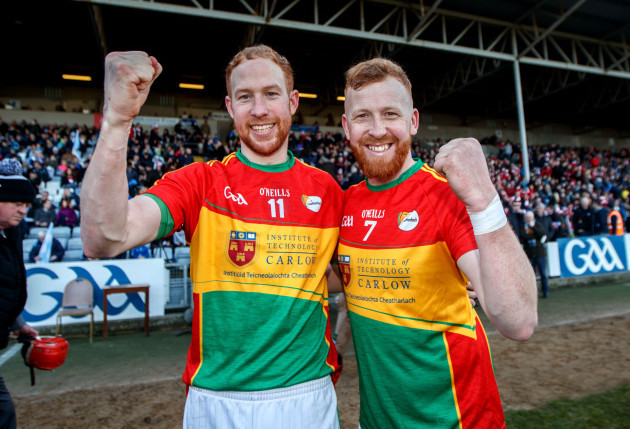 20 Jun All Animals are Equal, but some Animals are More Equal than Others – by Paul Coady

Posted at 14:45h in GAA, Structures by Ciaran Deely 0 Comments

I’m Paul Coady, I’m 26 years of age and I have been hurling intercounty for Carlow for 8 years now. My whole life has always revolved around hurling- for better or worse, I’m so far unsure!

Questioning the GAA feels like being that student in school who starts questioning the teacher over something and as we know, the teacher is always right. So don’t dare question the teacher and just sit there quietly instead. Continue to be a sheep and follow suit. That’s like many of us in the GAA. I’ve been lucky enough to work in the Realta Clinic Carlow under the guidance of one of the best physios in the world Star Geoghegan. The beauty of this was getting to work with many of the top athletes from all over the world such as David Oliver, Torie Bowie, Asafa Powell, Lashawn Merritt to name a few. 110m hurdles World Champion David Champion enjoyed coming to GAA matches with me when here in Ireland training but he could never understand the GAA organisation.

“What do you mean some counties get more money than others”

These were some of David’s favourite daily questions. The more I would try defend the GAA to David daily, the more he was actually making sense. He funnily referenced one day sitting alongside me in the car when I was driving as we were having one of our GAA discussions, “You guys outside the top counties are like the blacks once in America, you’re going to have to stand up for yourselves like we did at some stage or you’re always just going to be second class citizens”. He then went on to say “I like running and I’m good at it but I’m not going to run if the odds are always stacked against me or if I’m been treated or paid unequal to the opposition”. That has always stuck with me! Most days he would question everything just to annoy me, but I started running out of answers to defend the GAA after a while.

I never envisaged the Twitter thread below that I posted last week would receive such positive feedback, but all that does is highlight how many people are feeling the exact same as I am.

Some made the argument- considering the thread- why are Dublin hurlers not successful then? In my mind Dublin hurlers are well beyond successful and are a perfect example of what the GAA can do. In 2006 the Dublin hurlers were on a par with Westmeath, Laois & Meath- incidentally Westmeath beat Dublin in 2006. €17 million later, almost every club becoming exposed to a Games Promotion Officer (GPO) and the gap has opened substantially. Minor, U21, and Senior Hurling Leinster titles have followed along with a League title and have now become a real contender for the Liam McCarthy Cup. In a parallel universe, 13 years later Westmeath are at the very same standard they were at and are battling away at the same level. With the help of the GAA, Dublin have been able to climb back up into the top 9 teams. My argument here or on my timeline has nothing to do with Dublin GAA or any agenda against them. They are not my concern in the slightest, I would rather look at and point out, how, if the GAA really want to develop hurling in a supposed weaker county, then they actually do have the ability to it! Come help us counties outside the top 9 make that improvement needed, so in 13 years time we can be in the same position as Dublin are now- a position no one in Dublin would have envisaged 13 years ago. Imagine if Westmeath had received everything Dublin have received since that match in 2006 until now? Who knows where Westmeath could be now? I spoke about how only 11 counties have attained the All Ireland in the last 100 years, the other 21 counties have been failed. I believe they deserve better!

And if you’re going to comment, please don’t feed me the tired line that everything that has happened to improve Dublin in those 13 years since the Westmeath match is due to the Volunteerism in Dublin, please just don’t bother!

“I write the below with my Carlow hurling goggles firmly on, as a present Carlow hurler/fan with a worry for what’s ahead. They’re many counties the same but I’m just sharing my Carlow perspective. Apologies for the long thread and understand many will disagree. That’s ok.

Firstly, I understand the consequences of finishing bottom of the Leinster Liam McCarthy group meant demotion to the Joe McDonagh for Carlow hurling. I believe we have got to experience Liam McCarthy hurling to learn from it. At the moment, I believe Carlow are about 8-14 points behind the teams we played; but how do we ever get this gap closer if at a best-case scenario, we just Yo Yo up and down from Joe Mac?

This year the intensity, hurling ability, tactics and preparation from opposition teams and from us against opposing opposition was something that Carlow hurling never experienced before and I do believe experience will provide growth. More experience = more growth! I live and breathe Carlow hurling and I’m too worried about the future of Carlow hurling to not at least ask these questions to the GAA. Is Carlow going down to the Joe McDonagh the best thing for Carlow hurling? What’s a best-case scenario here for Carlow over the next 1/5/10 yrs.?

Why is there a relegation from Leinster but not from Munster? Regardless if we’re even at Waterford’s level yet, it is still hugely unfair. Relegating Waterford would be wrong, because it wouldn’t do anything for Waterford hurling, and it’s a shame the same doesn’t apply to Carlow. Hurling has top 9 counties all at a relatively similar level. For 100 years, aside from the Offaly and Antrim, no other teams have ever featured in the All Ireland final.

The GAA have had 100 years to bridge that gap from the other 21 counties and have never done. Is this not a massive failure? For Carlow to close the gap, similar to Laois, Westmeath etc, we need serious help from the GAA, serious financial help, serious coaching, more officers and planning. The 9 counties ahead of us are heavily financially backed; big hurling populations, development officers, sponsors. All well ahead of Carlow.

Incidentally I’m not asking that the top 9 counties lose any of this, rather help the counties of Carlow, Laois, Westmeath etc to also become exposed to the same resources. For e.g., our training for the championship was a day in Tramore where other counties in the Liam McCarthy in 2019 are able to head to a foreign country for a full weeks training and tactics. It’s not the making of a successful team but it’s a help to show the gulf between the counties.

Another massive issue is how big counties are able to work off huge sponsorship deals compared to other counties but still receive the same levels of grants funding. 9 of the 10 Liam McC had games shown live, 1 team hadn’t. 1 team had a 2-minute voiceover every Sunday night with every other team having highlights/analysis. 1 of 10 teams needs the promotion more than the other 9. That 1 team is obviously Carlow. Not looking for more, just the same.

Off topic but at least a 2-minute voiceover was more than the 0 coverage the Joe Mac teams get, with those counties also crying out for promotion. This is why Gaelic Footballers don’t want a 2nd tier because they know it will get no respect or coverage and they’ll be all but forgotten. This year Carlow hurling had attendances for the first time in my career, it had colour, it had kids playing hurling more than ever, it had a buzz within the county. Take the Liam McCarthy away and Carlow hurling loses that. Do Carlow hurling go quietly and make as little noise as possible, take this as our peak, and thanks for the memories and just watch as the county will eventually slip backwards in a hurling regard and spend the next 100 years where we’ve spent the last 100?

I realistically think on some days, that the other 21 counties would be better coming together and boycotting the GAA until serious promotion, financial aid and planning, was put in place to help these counties wanting to improve climb these levels.

So lastly, I believe Carlow hurling is at a crossroads like many counties in hurling. There is an ambitious talented group there, doing their best at the moment, and for the next while, we can try squeeze as much as we can out of the little we have and try fight the drowning water.

The obvious thing is this generation moves on, the hurling population continues to decrease in Carlow, the county eventually just slides back down the ladder, and all we’ll have were good memories. If the GAA really helped and wanted to see us continue climbing the ladder, I believe we at least might have a better chance at long term success. The present way, we definitely don’t! Noise might help, but no noise certainly won’t help “