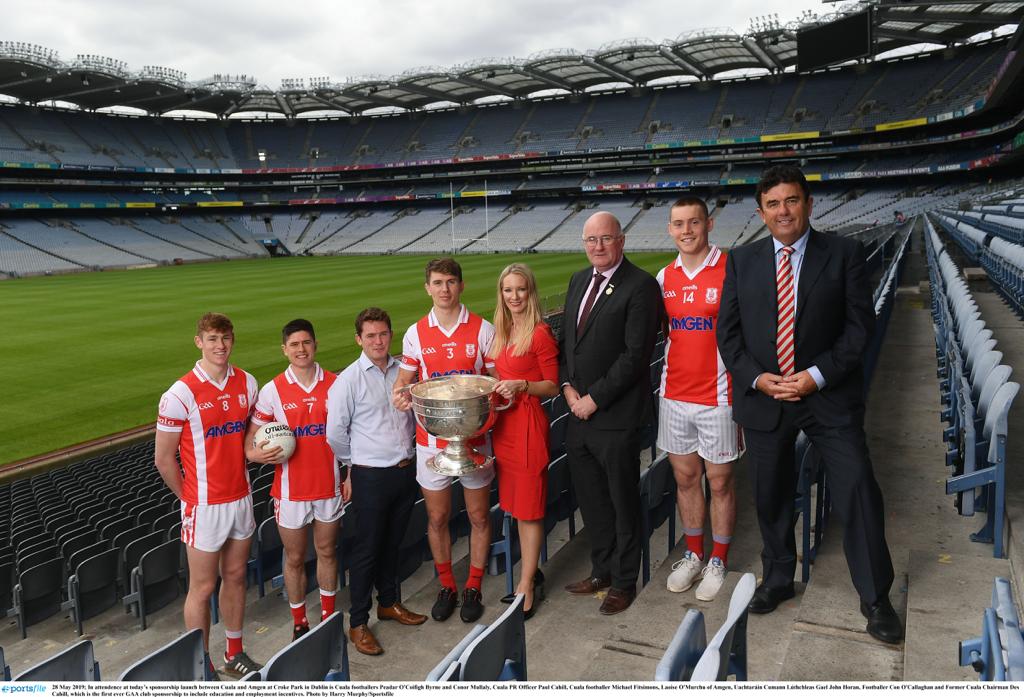 * A shortened edition of this article was first published in the Irish Examiner Newspaper on Saturday 08.06.2019

By the time you read this article, London Senior football team’s 2019 Championship season may be already over. The Qualifiers begin on Saturday, and in all but two of the seasons of London being involved in the Senior Championship, we have been knocked out in the first round. A sobering thought. And yet, here I am excited and confident looking into our game at the weekend. Why? Well for two reasons.

Firstly, the respect afforded to this team has been at times overwhelming, about the job we are doing on very limited resources and under extremely challenging circumstances. We started last November training on a Rugby pitch with only 15 players, attempting to get ready to play All-Ireland Semi Finalists Galway. I remember telling the players that we would be ready for Galway. Why? Because we had to be. And sometimes in sport – for all the things that money and resources can buy – mindset, determination and a clear plan can bring a group of people a long way.

The second reason is, it’s FUN! The whole thing, not just the game! The training, the sacrifice, the post-match meals, the team building days, the runs, the battle, the arena, the fight. Even the media. It’s the journey, the whole package. Jurgen Klopp said it best in the lead up to the recent Champions League Final that whether they win or lose, they will enjoy the journey along the way. They will battle together as friends, play the Beautiful Game, and remember to have a laugh along the way too.

So, when I look at the current state of the GAA, I am filled not with despair and cynicism, but with hope and excitement. There are, however, several big picture challenges facing our association, but not without their solutions. Let’s start with the fixtures.

This is the hardest to fix but by no means impossible. The recent 75th anniversary of the D-Day landings reminds us what great things can be achieved through collaboration, compromise and consensus when people with different perspectives work together to discuss and deliver a plan. Now I am not comparing Soviet Politburo bureaucracy to the GAA Congress; the flush new money of the USA to the GPA; and the battle hardened and principled British to the CPA…but if they could forge a path forward into the future, then surely our key stakeholders can also.

The leadership team of the GAA is moving in the right direction. I know Director General Tom Ryan is keen to set out a vision for the association and President John Horan has shown his forward thinking in setting up a Fixtures Review Committee. The one group I would listen to most is the CPA. The club player can be forgotten in our never-ending quest for additional commercial revenue, professionalism in how we prepare our players and how we have structured our fixtures. They come with a very simple request- give the club player games and tell them when they are going to be!

A few weeks ago, I played both a Junior B Championship game and a Senior League game for my beloved home club Horeswood GAA on a quick visit back to Wexford for the weekend. I loved every minute of both, my first games in 7 months. I can safely say the great assets of the GAA are its players and the game itself. It is such a great game to play- give people more of them. And give them a yearly schedule of fixtures, so they know when they are and can plan around them.

Tiered Championship – Everyone Finds their Level

We have a great game, but we are not selling it accordingly. Our Championship structures are letting the players, fans and officials down. We have such a good spectacle, but a terrible Championship structure in Gaelic football (the amazing Hurling Championship, in contrast, shows what can be achieved when you go with a bold vision). Of course, there are brilliant games, even freak results like a Division 4 team Limerick beating Division 2 team Tipperary, although with Limerick’s subsequent whipping at the hands of a resurgent Cork, normal order was restored. And thankfully, we now get to see Cork v Kerry in the Munster Final for the 157th year in a row!

To me, a tiered football championship structure makes complete sense. For the season to run smoothly, scrap the pre-season competitions; permit return to training only from 1st January onwards; leave the Leagues where they are, though scrap league finals. It’s a league! Allow April for clubs only, it’s not perfect, but it’s a start. Run off the Provincial competitions as standalone competitions, make them knockout, get rid of seeding, bring back the one-off drama of knockout football again. The provinces are too powerful, so no point talking of scrapping them. You’ve got to learn to work within the constraints of the GAA and accept that things sometimes move slowly. But change is on the way, it’s inevitable.

For Championship, we need a tiered competition. Naysayers talk of the big day out. Why? To get trashed by Meath, or thumped by Dublin? We want games against teams of our level or similar, and more of them. We want the opportunity to develop, to improve. If you’ve ever been lucky enough to win an Intermediate title with your club or in Ladies Football, you’ll know what an amazing feeling it is to savour that win too. And speaking of which, we could learn a thing or two from Ladies Football! What great competitions they have. We are well advised to listen to and learn from the women in our lives, they usually know best anyway!

Run 2 tiers off Division 1 & 2 and Divisions 3 & 4 of the league, with promotions and relegations. Promote and market it properly. Write it into the new TV rights deal. Give winning teams a holiday; have All Stars; play the games before and with the big Sam Maguire games. Create a buzz. If the games are good, the people will come.

But how do we catch the Dubs? Or Mayo, or Kerry, Tyrone, Galway, Donegal… Dublin have experienced the perfect storm of huge inherent competitive advantage- with the exploding urban population, drastically higher income and sponsorship money, and inexcusably exorbitant games development funding compared to the rest of the counties; plus, an exceptionally gifted generation of players all coming together, under potentially the greatest modern manager the game has ever seen. It leaves the rest of us playing catch up. The greater problem is not the current crop of gifted players, but what comes after them.

As a Games Promotion Officer working for Dublin GAA from 2008-2011, my colleagues and I could see the runaway train hurtling down the tracks. I call it the industrialisation of GAA football talent development- a phrase coined by the excellent Miguel Delaney in the UK Independent newspaper when writing about how France, Germany, Spain and England have streamlined their structures and mobilised their considerable financial resources to develop young talent in football. It is no surprise that the last 3 FIFA World Cup winners are contained in that list. Plus England, but that’s a whole other story!

My own philosophy for sports performance is in the benefit of small, incremental steps of improvement all leading towards long term, sustainable development. You need stability, a philosophy, an environment, a culture, a plan. And most of all, you need good people all rowing together in the same direction. Dublin have cracked that. Others are on their way. Cork really interests me. They have a plan, with good people recruited, under a brilliantly progressive young CEO. Aside from the traditional powers of Kerry, Mayo, Tyrone, it is my belief it is in the large urban areas that the GAA will grow and ultimately test Dublin’s hegemony. Cork, Galway, Meath, Kildare.

The Soul of the Association – A Case for GAA 2.0

When Joe Brolly says the GAA has lost its soul, I wonder if he wants the GAA to go back to the era of the 1950s where players had a smoke at half time and went back out to play the second half with their flat cap on and a warm belly full of whiskey. As my Dad Sean said a long time ago, things weren’t better back then, people should appreciate what we have now. I like Joe, I like how he thinks differently and is willing to challenge the sacred cows of the GAA and Irish society. I don’t think the GAA has lost its way, but I do believe we’ve stumbled off the path.

The commercialisation of the GAA is a good thing. The multitude of facilities and top-class pitches dotted all around the country in every village proves that. Of course, the GAA as an association needs to make money, and I love how all the money ultimately is channelled back into the clubs and facilities all around Ireland. But these commercial decisions cannot be made to the detriment of the fans, spectacle of the game or player welfare. All decisions must go through the lens of- is it good for the game? If not, then we take another path. And worryingly, so much money is being wasted on the Inter-County squads now. I would like to see these counties and the ‘experts’ they bring in audited. Money alone does not achieve success, good people do.

We need a vision, a renewal… a GAA 2.0? The GAA is a force for such good in this country, we just need to tweak a few things and lay out a vision for what kind of an association and games we really want. Put it down on paper, set out our mission, vision and values. And stick to it.

In the words of my good friend, the Irish World Cup 94 legend Terry Phelan – ‘You’ve got to enjoy it son, you’ve got to enjoy the game!’. Wise words. It’s why we keep coming back to this game we love so much. We have an opportunity now to make the game better for everyone – let’s not waste it.