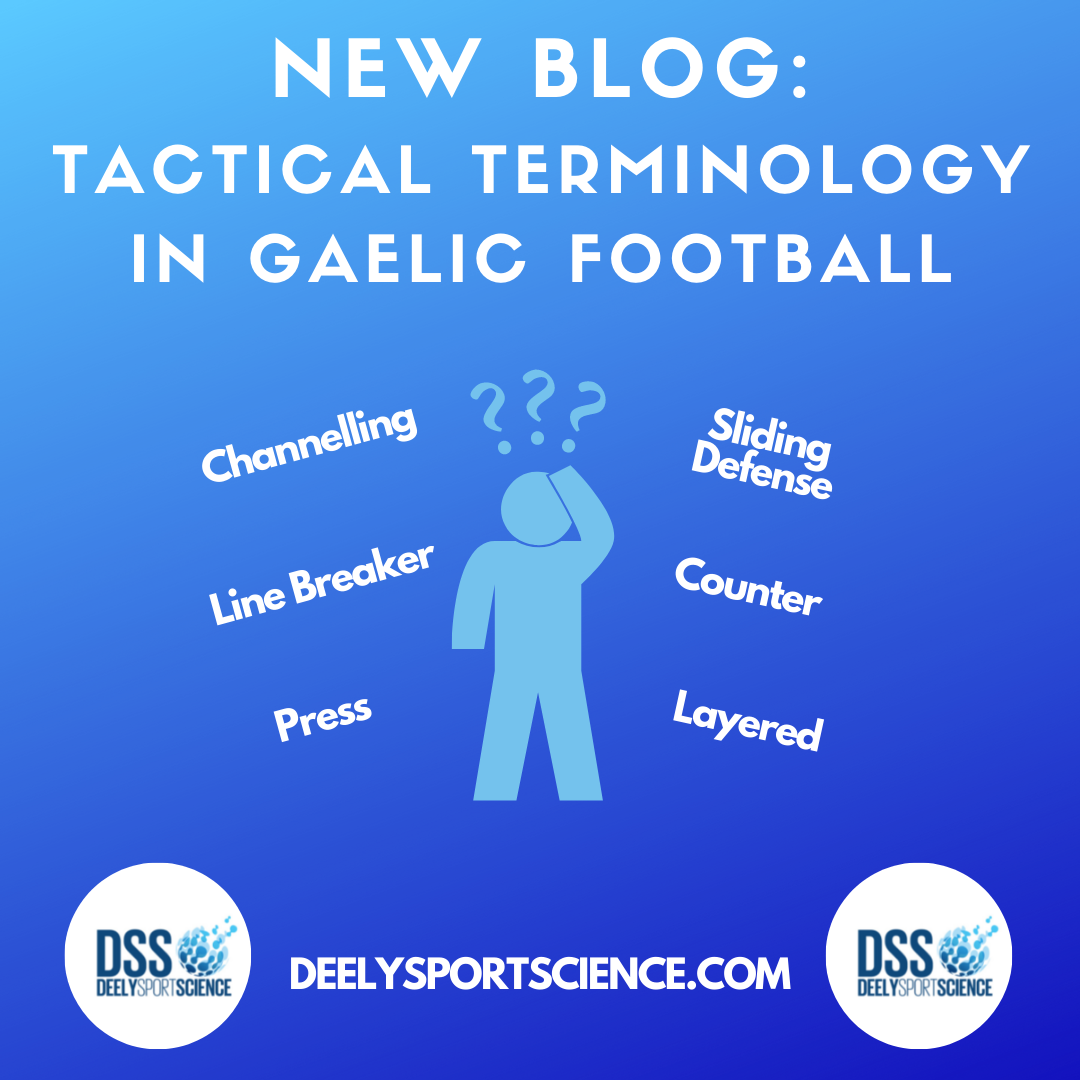 Posted at 10:10h in Coaching, GAA by Caoimhe Morris 1 Comment

Over the last few years, there has been some real advances made in Gaelic Football coaching and managing. Basketball coaching has become very relevant particularly when trying to clear spaces around the opposition D and create width and depth in attack. Our game has changed for certain, some pundits may try and argue for the better and some for the worst but whatever the thoughts are, I personally feel the game is in a very good place. Throughout all my thinking about the advances made in coaching another thought crept into my head while listening to numerous interviews and podcasts this year “the modern day coaching lingo.”

So as the coaching in our game keeps evolving and becomes more and more tactical, here’s some tactical terms which you are likely to hear associated with coaching and analysing in Gaelic Football;

1. Possession Restarts – Dublin and Stephen Cluxton created this phenomenon a number of years ago of renaming the old term “kick-outs” to possession restarts, this doesn’t just include kick-outs but also free kicks, side line balls, basically anytime the game is being restarted with your team in possession with the emphasis on keeping the ball. This season’s games have been absolutely intriguing in the battle for primary possession off kick outs and Tyrone epitomised the importance and value of restarts with a match winning goal in the All Ireland Final direct from a possession restart. In fact it took just 11 seconds from the moment it left Niall Morgan’s boot to the moment it hit the net.

2. Channelling – Basically associated with coaching tackling/defending, delaying a tackle on a forward in order to direct him/her into a particular direction e.g. towards the side-line or another defender, smart defenders will try to force the opposing player into the channel where he will have to use his weaker side. A lot of the top teams are now being coached not to dive into the tackle but rather channel your opponent towards the side-line as a result cutting off the options for the man in possession of the ball and use the side-line as an extra defender.

3. Line Breaker – Take the current champions, Tyrone, they have some of the best line breakers in the country. Guys that can break lines in the oppositions rear guard, for example if the opposition play a high line in the middle third you need players with the pace, athleticism and ball carrying ability to be able to penetrate these lines and open up the game. Take for example Peter Harte and Kieran McGeary’s ability to break lines in the Kerry middle third in the semi-final and opened up the whole game for McKenna to walk a ball into the net. The really top teams are mixing the athletic ability with the technical ability as well, Tyrone in my opinion are easily the best physically prepared team we have seen recently alongside Dublin and Mayo in the conditioning stakes.

4. Middle Third Press – A lot of teams this season have preferred to flood the middle third with a staggered line of inside forwards and half forwards and midfielders when they have lost possession of the ball, putting pressure on the opposition higher up the field, hoping to punish a mistake which in turn would lead to a better scoring opportunity closer to the opponent’s goal. Tyrone did this so effectively this year, but it takes a savage amount of discipline and concentration to tag runners and track your man. The dangers of such a press are, if everyone is not working hard and switched on, the opposition may find gaps in your system, punch holes and expose your isolated defenders in behind.

5. Counter – Counter Attack – The counter attack was a military tactic used by one army successfully defending the advances of another army and beginning to then come back with an attack of their own. Teams are at their most vulnerable when they lose the ball high up the field in an attacking situation but how do teams respond to the counter – counter attack. That is when a team who is attacking, has the ball turned over but wins it back due to an opposition being too hasty and panicky in possession. These situations happen all too frequently during games and can be coached. Dublin were easily the best team in the country at covering the counter-counter, they always seemed to have manipulated a plus one in place in case a counter attack is repelled and very seldom if in fact ever left themselves open to a fast break and slack goal chances.

6. Layered Defence – A progressive defensive system which has a lot of players into the defensive zone in layers, typically something like Fermanagh or Down operated with at times with maybe 3 staggered lines of defence starting with their half back line, their cover and their full back line. Tyrone had been operating a deep lying layered defence for a couple of seasons under Mickey Harte but now operate a more middle third type press. A layered defence is an effective strategy when closing out a half, playing a segment with a black card or trying to manage the game for a period of time.

7. Sliding Defence – A defence who defends inside the forward and forces the opposition to move wide eventually restricting the spaces, Dublin did it excellently, probably better than most with the deployment in the last ten years of Cian O Sullivan and Johnny Cooper who operated most of the previous few years as the defensive sweeper. It’s very much a basketball type defensive ploy, keeping opposition outside the D, away from the scoring zone, forcing them down side-lines and into blind alleys. Tyrone were superb at doing it this year too, with Mickey O Neill performing a similar role against Kerry in their semi-final.

8. Transition Play – Making the counter attack from defence to attack as effectively and efficiently as possible. I have been saying for a few years now, it is simply what separates the really top teams from the rest is the speed, efficiency and effectiveness of their transition play both through the hands (running game) or with the foot (kicking game). Look at how the best teams transition not just with their mobility and athleticism but more importantly with the efficiency of their attacks to score ratio, when a top team turn you over you will be punished.

9. Zonal Press – A ploy now used by most teams introduced by Dublin in 2017, when they went after opposition kick outs with their 4-4-4 zonal press. It is a high risk strategy but one which also comes with rich rewards. Best used when you have a free kick because you are in control of your press, Kerry did it very effectively this year and the likes of Tyrone and Monaghan evolved it even further by bringing out their goalkeepers and blocking off kick out channels in a massive high stakes poker move, one which ultimately helped Tyrone see off Ulster championship favourites Donegal.

10. A False Press – This is a ploy that some teams like to adopt during open play, when they don’t have numbers high enough up the field to press the opposition kick out, so what they do is concede the kick out but concede it to a particular player. Some teams will identify a player to have the ball, and lure the opposition into a particular area and then pounce! Probably more effective at club level when all players aren’t at the same technical ability of inter county standard players.

11. Scenario Based Training – Niall Morgan a few weeks back on The Locker Room Podcast by www.DeelySportScience.com mentioned this term, it is something a lot of the top teams do in training on a regular basis. It is putting the players into match related situations and getting them to perform skills and situations under mental and physical stress so that come match day, they will have replicated these moments and be able to perform during TCUP (think clearly under pressure) time.