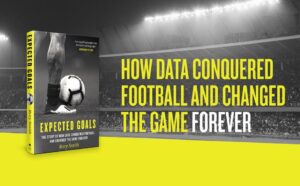 Rory Smith is a football journalist with the New York Times and this year wrote about the use of data in football. It’s as simple as that. The “people’s game” has over the last twenty-five years embraced data and has learned to use it.

Data has become intrinsically connected with sports, mostly from America and especially in light of the Moneyball effect from Michael Lewis’ investigation into data and baseball in the 2002 season with the Oakland A’s.

Smith begins the book looking at the role of young people in the Philippines who have to tag a large amount of movements in a football match. One of the more interesting metric that is tracked is “packing” which is the number of opposition players bypassed by any single action. It is a way of gauging how effective an individual is at passing, avoiding dispossession and also moving into a position to create danger. The obvious danger is scoring and scoring more than your opposition, wins matches.

Twenty-five years ago matches were stored on VHS, and they were clunky, hard to transport and were susceptible to damage. The birth of DVD and the internet revolutionized things. The world became a smaller place and data could be gathered, stored and transferred immediately.

A generation of fans were exposed to early versions of computer games such as FIFA, Pro Evolution Soccer and Football Manager and with the emergence of Fantasy Football. That changed the way people, such as managers, players and fans began to interact with numbers. The worth of a player and their effectiveness could be analyzed by using early versions of metrics.

ProZone was championed by some managers such as Sam Allardyce and Harry Redknapp while the Opta Index was used by Sky Sports. So coaches began to analyse their own players, the opposition and potential signings. That’s not to say that all managers embraced this new way. One manager said “There’s no way of measuring a player’s heart”. This is still heard, often from pundits who castigate losing teams for not having enough Desire, Belief, Spirit, Togetherness, Heart and many other such words.

Opta Index metrics were displayed on screen during matches. As viewers we became familiar with distance covered, passes completed, turnovers etc. Interestingly this World Cup has seen the emergence of more data given to us on screen during matches. It is in response to our ability to consume and understand newer and better forms of data. Expected goals, assists and defensive actions are some of the newer terms on our screens.

As money began pouring into the British football market, clubs were looking for more of an edge. Some began recruiting sport scientists from universities such as Loughborough and Liverpool, and began forging solid links.  They used newer ways of interpreting and subsequently adapting data which tracked the physical loads of players. They are monitored in training, in their sleep, nutrition, recovery and in matches. Players wear GPS vests both in training and in matches. Training can be individualized, depending on the data that is collected on players. Players are assets and effective assets help to win matches. The worlds of academia and elite sports merged and one fed off the other.

Data is not the new kid on the block anymore. All clubs have data analysts. It’s just that the richer clubs have more people doing it. They have whole departments and are staffed by people with PhDs, with backgrounds in Maths modelling, astrophysics and in many cases with no background in sports. There is now a transfer market for some of the better data analysts.

Does the use of data help win matches? Yes, and no. Harry Redknapp, as manager of Portsmouth asked his data analyst, Michael Edwards, whether they would win their next match.  He replied in the affirmative. They lost and afterwards Redknapp suggested that next time, “Why don’t we get our computer to play against their computer and we’ll see who wins?”

Smith set out to write a book about data but in the end he wrote about people. It is the tale of visionaries who saw how the interpretation of data could be transferred to a global sport. It is reasonably technical but is well written and references many sports across the world but mostly focuses on British football.

I found this fascinating with a great level of detail about what has happened and what is happening in professional sports.

He tracked the tales of some who lost and some who won. Just like sport itself.